Identified on October 21st 2010, a Prothonotary Warbler foraging in front of the NY Public Library at 41st Street and 5th Avenue generated quite a lot of excitement. I went there on October 24th to see this unusual sight, and found the Prothonotary Warbler doing a really good impersonation of a House Sparrow - foraging on the ground, under and on top of trash cans, on tables. It also spent time in the trees, but there didn't seem to be a ton of insect life up there so it spent perhaps more time on the ground than in the canopy. It's often a somewhat terrestial warbler anyway rather than a canopy bird. 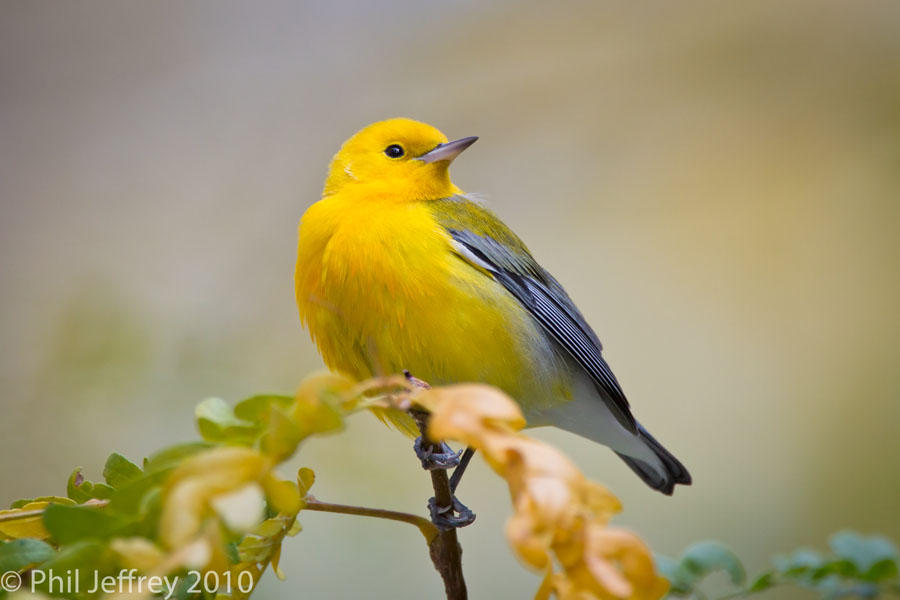 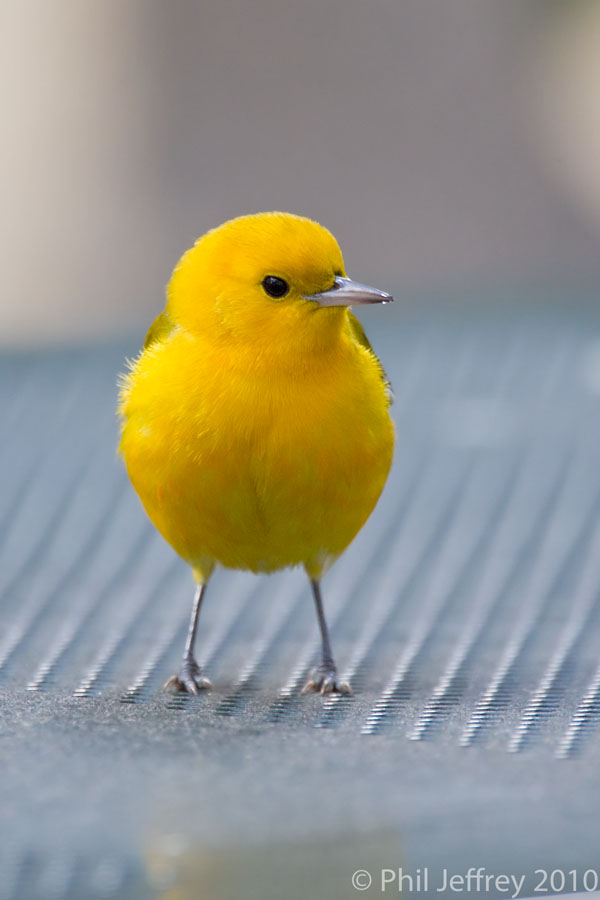 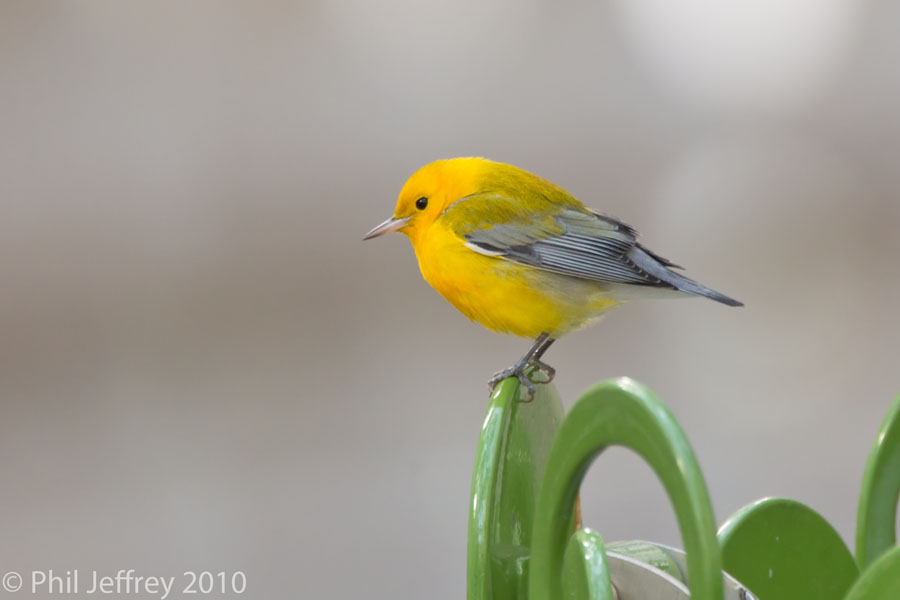 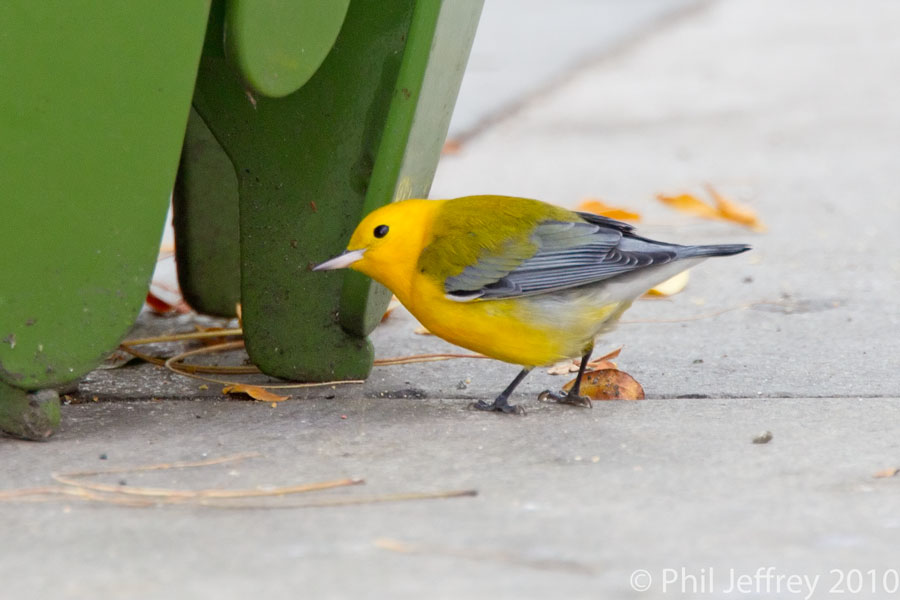 Quite a surreal experience for a bird that is a widespread breeder in swamps (a.k.a. Golden Swamp Warbler) not in urban habitats decorated with a few trees, shrubs and chrysanthemums. It appears to have adapted to its new-found home by feeding on whatever food is available, just like the House Sparrows which it often shares space with.

Other wild species were also present: Hermit Thrush, several White-throated Sparrows, at least four Yellow-bellied Sapsuckers which were also absurdly tame, and one Black-capped Chickadee as well as the expected urban combo of House Sparrow and Rock Pigeon. Bryant Park pulls in its own selection of neotropical migrants. In November 2002 there was a Yellow-breasted Chat elsewhere in Bryant Park which did much to put it on the map as a place to pay attention to. You can search the eBirdsNYC archives for Bryant Park reports.

Prothonotary Warbler is almost (or perhaps totally) unknown as a fall migrant in NYC. In spring we sometimes - but relatively rarely - get overshoot migrants (see this bird or this bird). But since NYC is north of the breeding range, there really isn't anything north of us to migrate through NYC in fall. Clarification after a conversation with Ben C. about this: the coastal plain population seems to top out around southern-central NJ, but the population that travels up the Mississippi river valley gets as far north as extreme nw NY state and even into southern Canada - they're just way west of NYC and unlikely to come this way. You can see this in the range map I linked to earlier in the paragraph. Prothonotary is a trans-Gulf migrant wintering in Central and South America. 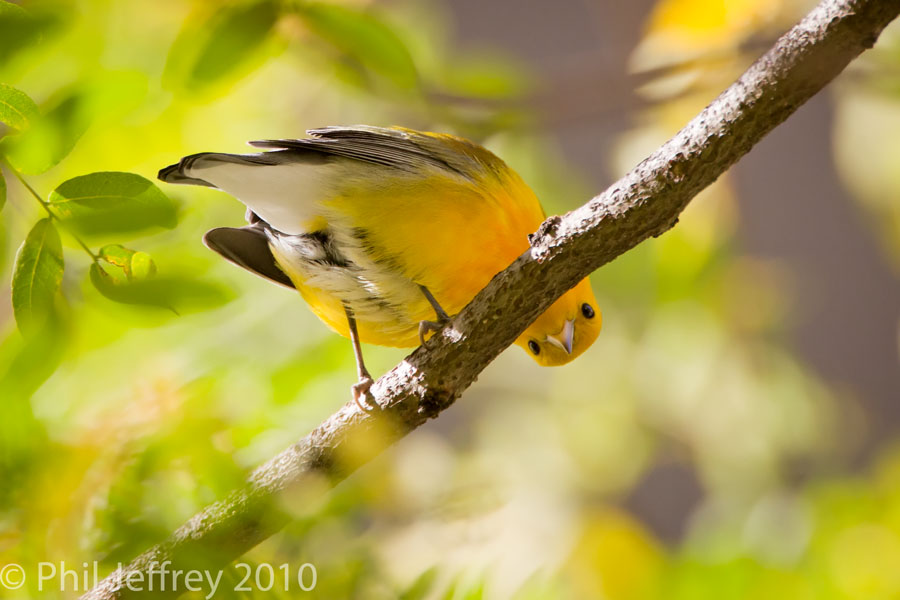 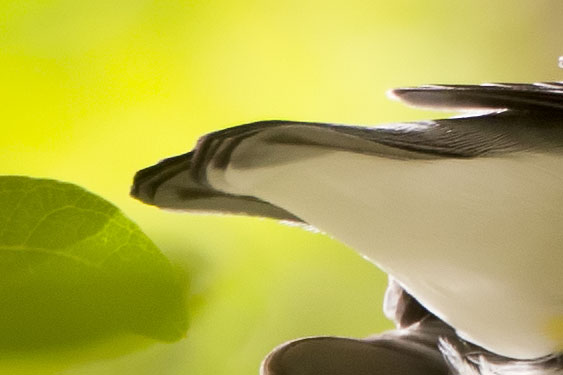 Close up of tail feathers

this is a first fall immature bird. If you have the first volume of Pyle's Identification Guide to North American Birds the figures on p.210 and p.498 are pretty useful. Immatures have sharper feather profiles, especially so on the inside vane of the feather, compared to adults. By the extent of white on the tail (reaching the end of the tail feathers) and by the coloration this is a male. Apparently there is no pre-alternate molt in Prothonotary Warbler so it's essentially in breeding plumage, although the pale bill color is a seasonal feature - in breeding males it is black. (This is not mentioned in Pyle but it is in the Peterson Warbler Book).

The most likely way for a first fall male Prothonotary to end up in NYC is if it's a "wrong way" migrant - usually immatures that have either their sense of fall migration direction set wrong and end up in the strangest places. In recent years in NYC this has included Scott's Oriole and Western Tanager. The pinnacles for way-out-of-range birds are still the 2001 Calliope Hummingbirds. Birders who have asked the locals have been told it's been around for at least two weeks and probably longer. Although as of 10/24 it appeared to be flying a little weakly, it's also survived so far and the week of 10/25 is forecast to be warm. How long it can survive in that very non-native environment, or if it manages to reset its migration sense is anybody's guess.

Apropos that, if anyone has the inclination to feed this bird, please at least feed it something more useful than bread. Suet and mealworms can be obtained from pet stores and are far closer to the natural diet than Wonder Bread.