A Western Tanager was found near Tanner's Spring in Central Park on the morning of March 26th 2008 by Matt Pelikan. I saw the bird the following Sunday, March 30th.

I've felt that the age/gender ID was a little ambiguous on this bird initially, so I've taken the opportunity of having my own photos to attempt to resolve this, if only for myself. Recent Western Tanager reports that come to mind include the winter 2006/2007 bird in New Jersey, of which I also have photos, and the 2006/2007 bird in Long Island. I suspect the former succombed to the elements once the hard weather bit, the the latter may have survived because it was coming to the feeder of some birding enthusiasts. Notably there were two Western Tanagers in eastern MA around the same time the NYC bird appeared, and a Bullock's (-ish) Oriole turned up in CT around the same time. The CPK Western Tanager persisted until at least April 9th.

Identification of adult male Western Tanagers isn't very difficult. There's a yellow wedge on the median coverts (the upper "wing bar"), a white wing bar at the tips of the greater coverts (lower wing bar), and a very prominent black/yellow/red patterning. Apparently the extent of the red on the head is variable in the red color may be derived from diet in ways that differ from the red in other tanagers.

The NJ bird is not all that difficult either, but it's not an adult bird. It has quite a few features reminiscent of an adult, notably the yellow bar on the median coverts, red on the head, overall yellowish background color, and tellingly the presence of black feathers molting in amongst the olive older ones. This bird appears relatively far along in the pre-First-Alternate plumage molt, so in some ways it's closer to First Alternate than it is to First Basic although certainly not all the feathers are molted: 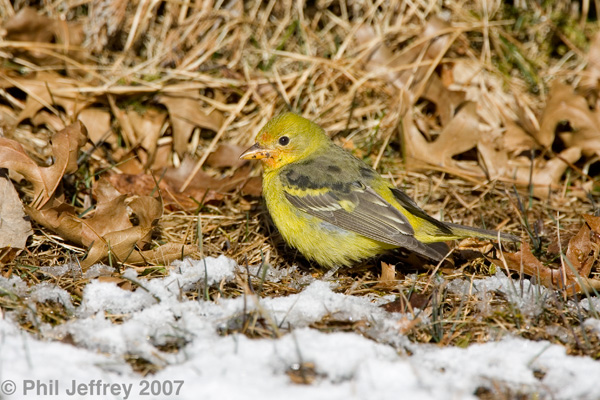 Now to the NYC bird: 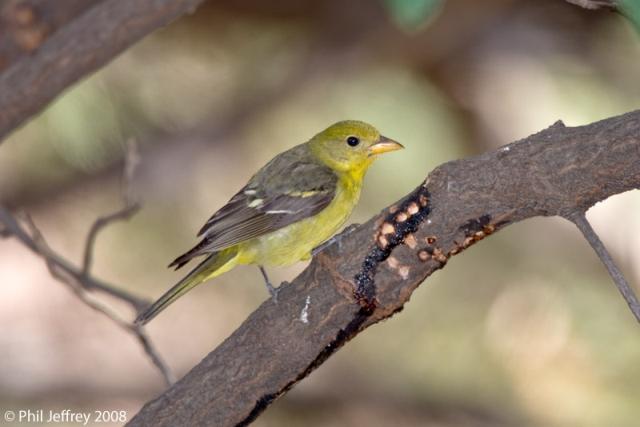 It's not easy to see from a small photo like this, but examination of the full-size version suggests to me that the wing bars are worn. Also if you look at the undertail shot I took: 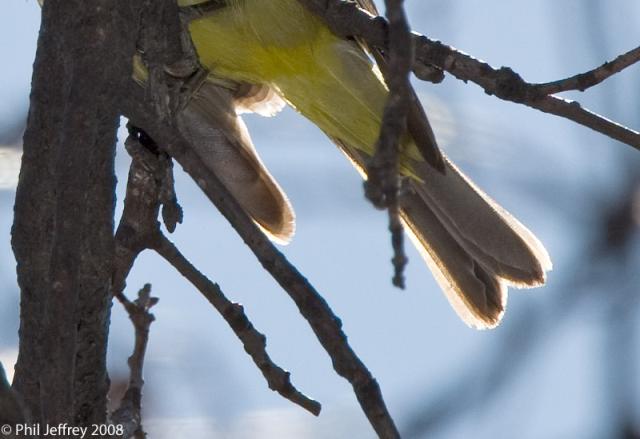 you see that both the shape of the outer tail feathers and the wear on them indicates that this is an immature bird. Compare this to the adult basic plumaged Long Island bird (see here) and there's an immediate contrast in the degree of wear and the broadness of the tips on the outermost tail feathers. But here's where things get messy. Pro-immature male points are that the upper wing bar is yellow (may or may not be definitive) and that there's contrast between the back and rump - the former being darker and the latter being yellower on males than females. However compared to the NJ bird this bird has either not entered pre-alternate molt or it's a female that is just starting to do so - you don't see any back feathers that are black-centered, nor is there any trace of red on the face. Furthermore Pyle states that some immature males and females overlap in plumage characteristics.

Shai Mitra's post on NYSBirds-L got me looking even more closely at the NYC and NJ birds. For example the median coverts on both the NYC and NJ bird are somewhat dark centered, whereas the greater coverts are more gray-centered. This suggests different ages for them - perhaps the median coverts molted in fall with the greater coverts retained from juvenile plumage in the NYC bird. The NJ bird is on average fresher and there's decent odds that at least the median coverts are new (first alternate plumage) given the freshness, color and extent. Here are close-ups of the coverts on both sides of the NYC bird: 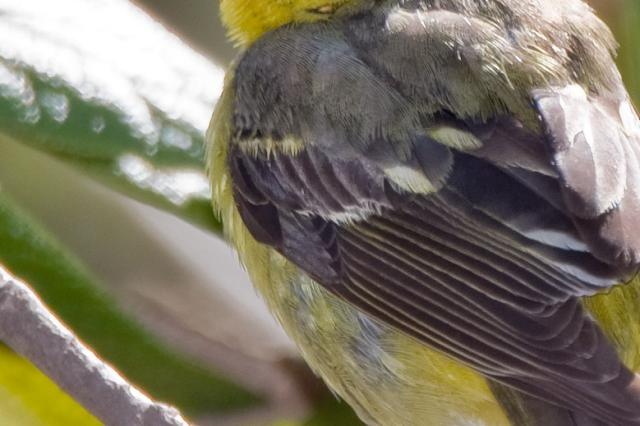