All photos and text copyright © Phil Jeffrey, 2001-2009. I don't have an issue with personal use of the images, but for all other uses please contact me.

An apparent Hermit Warbler (Dendroica occidentalis) was discovered at Jones Beach on Thanksgiving 2002 and stayed there for close to a week. Unfortunately, this bird was probably not a pure Hermit.

In the ranges where they overlap, Hermit Warbler and Townsend's Warbler (Dendroica townsendi) exhibit a significant level of interbreeding, giving rise to hybrids and back-crosses in a manner somewhat analogous to the Blue-winged Warbler and Golden-winged Warbler on the East Coast. Since both Hermit and Townsend's are closely related (and also related to Black-throated Green and Golden-cheeked Warblers with which they don't overlap in range) such interbreeding is perhaps not so mysterious.

The least contentious part is probably over aging and sexing the bird. Since there's a partial black bib, limited black streaking in the crown, and dark streaking on the back this bird looks like an immature male. Lack of a full bib and gray/olive auriculars eliminate adult male, and partial bib and back-streaking eliminates female. Black shaft streaks in the wingbars also support it being an immature. Also, very few adult birds are fool enough to indulge in this level of vagrancy...

This bird is obviously not pure Townsend's by any stretch of the imagination. There are a whole host of ID features that indicate at least some Hermit, such as the extent of yellow on the face and the yellow eye ring: 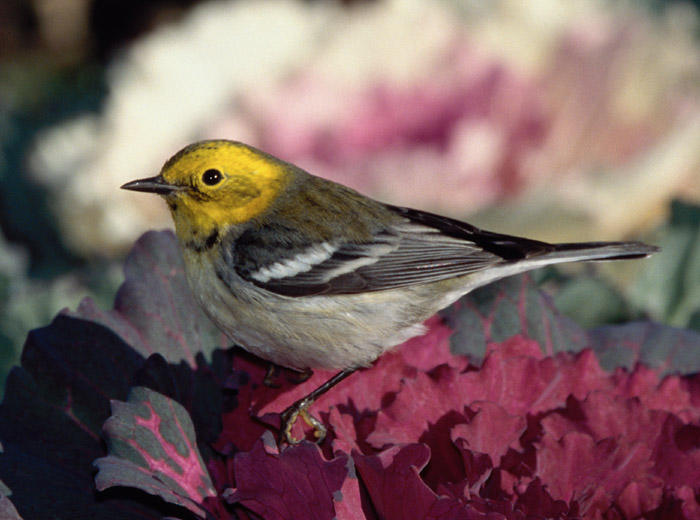 The limited black crown streaking is shown better on the reverse side of the bird: 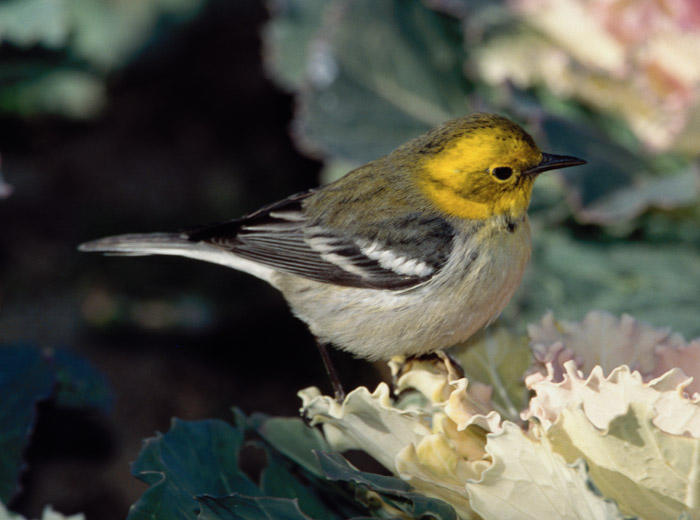 Note that it extends down into the forehead, which strikes me as a little too extensive for first fall male Hermit but perhaps this feature is rather variable. The olive color in the crown extends down almost to the bill and this is also rather too extensive for typical Hermit. In both of these pictures the buffy wash on the side of the bird is not out of bounds for fall Hermits, both adult and immature. The lack of yellow in the vent area eliminates an aberrant Black-throated Green warbler.

There are two things wrong about this bird for pure Hermit: the presence of yellow extending below the black bib area, and the amount of streaking on the chest and flanks. The streaking on the flanks is difficult to discern in any of these JPEGs and is more evident in the original photos, however this picture: 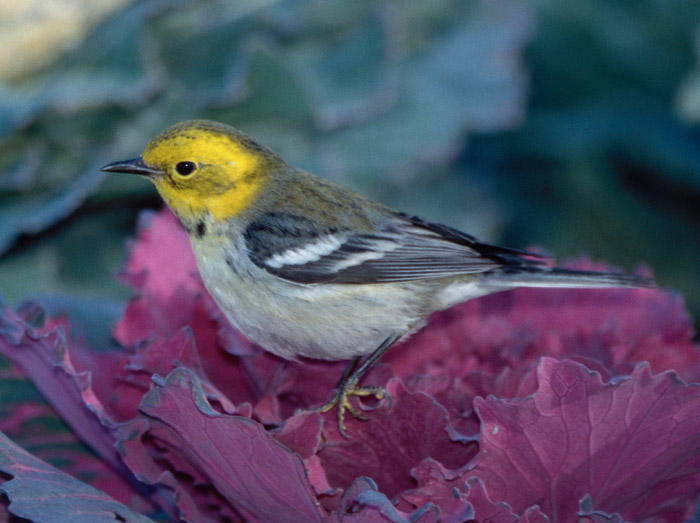 shows the streaking on the breast near the wing-bars. On the original slide you can see fine black streaks as far down the flanks as the legs but it is not strong. In both cases the extent of streaking is more consistent with a hybrid than a pure Hermit. The same applies to the extent of olive wash on the back of the bird, which is perhaps a little extensive even for an immature male (Hermit would be grayer than Townsend's). Notice that on Greg Lasley's site the bird shown there, also a contentious hybrid, has a much grayer back than on this bird. The extent of yellow below the bib is clearly shown by: 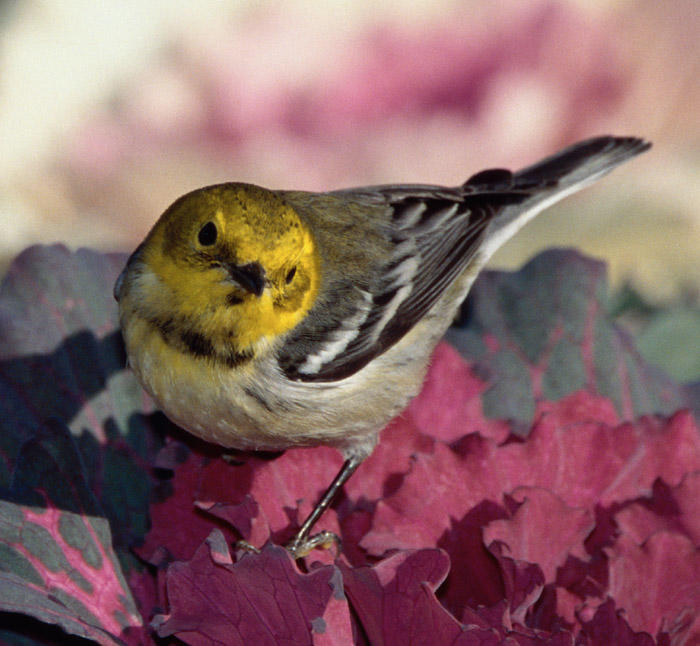 which also shows the incompleteness of the bib (not unprecendent for immature male Hermit, but still very unusual) and more streaking in the crown. There's been some discussion as to whether the extent of the black bib in an adult male Hermit would actually cover this yellow pigmentation, but this is troublesome since this would involve making considerable assumptions about the moult pattern of the bird.

A small number (~3%) of adult male Hermit Warblers do show an aberrant plumage in which they show more yellow than typical. However the published studies don't seem to give definitive numbers on the proportions of supposed pure first fall male Hermit Warblers that look like this. This proportion is inevitably very small, and there's no a priori reason to assign this bird as Hermit without looking hard at hybrids. It's worth noting that Hermit is very, very rare this far East (there is no Hermit Warbler record in NY State) and the easternmost populations of Hermit are precisely those that overlap with Townsend's Warbler and which could generate hybrids.

This bird is also a little too Hermit-like for a first-generation hybrid. If it is a hybrid it's possible the offspring of a hybrid X Hermit pairing. However at this level, plumage variation eliminates any distant possibility of making any firm statements about it's parentage.

You can drive yourself crazy wondering about this bird. I personally think there's enough indications of Townsend's Warbler in it's background to mark it as a Hermit X Townsend's hybrid, however I'm not going to start an argument with anyone that has seen the bird and is comfortable with it being an aberrant Hermit. Everyone's life list is their own concern.

Analysis of a collection of Hermit Warblers at the American Museum of Natural History by Joe DiCostanzo and Tom Burke led them to the conclusion that this was probably a hybrid. Comments from several West Coast birders echo this.

The NY State Area Record Committee (NYSARC) position on this individual is also that it's probably a hybrid. It can be found in their 2002 Annual Report.

Pictures and discussion of Hermit and Townsend's: