All photos and text copyright © Phil Jeffrey, 2001-2015. I don't have an issue with personal use the images, but for all other uses please contact me.

On a 2001 trip to the Rio Grande Valley in TX, I was at Santa Ana National Wildlife Refuge on April 7th and April 8th. Both days I saw what appeared to be a male Tropical Parula with what I would otherwise have no hesitation calling a female Northern Parula. On April 8th I was waiting near the old Manager's Residence site for an appearance of the Clay-colored Robin when this Parula pair reappared. They were clearly together, since the male was following the female, and the female was collecting nesting material. (From an email exchange with Gene Wilhelm, apparently this pair nested at this location).

Although I got really bad photos of the male Tropical Parula, there's nothing in them to suggest that it is any other species: 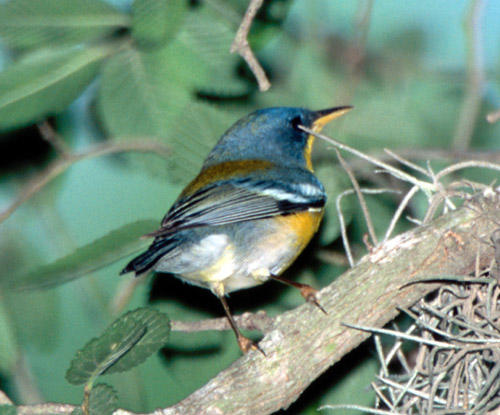 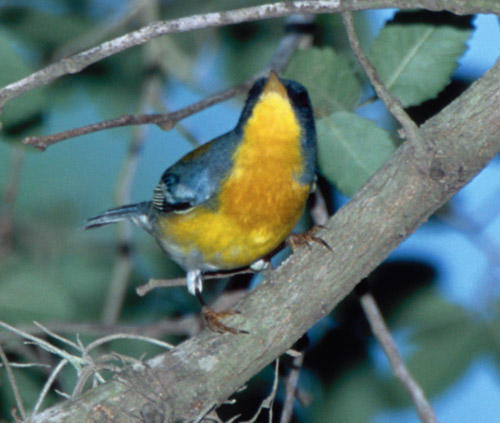 but the female, viewed at close range through binoculars and also through the lens, appeared to me to be a Northern Parula. The second picture is blurred at the head but included to provide better imaging of the wing bars. 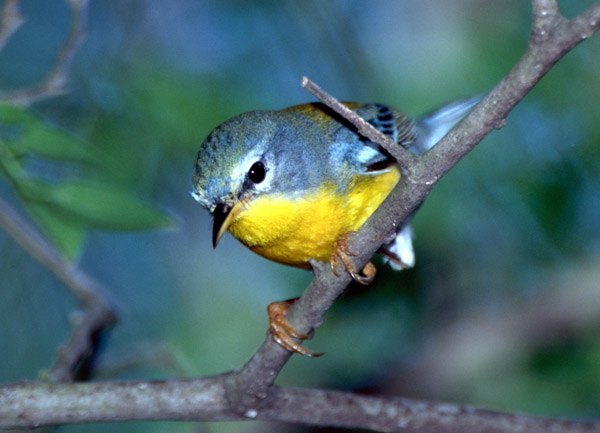 Subsequent prompting by Gene Wilhelm induced me to look more carefully at the bird. Based on reading Sibley, the Peterson Warbler book and Warblers of the World I've come up with the following "discussion":

Two things are striking about the female - first, the color of the throat and breast is a very bright yellow (also evident on the slides and not a scanning artifact). The extent of the yellow throat is wide, extending somewhat into the malar region, and extending down into the breast and upper belly and along the flanks. The yellow coloration and it's extent are much more consistent with Tropical Parula and somewhat too extensive for Northern Parula which has a much narrower region on the throat and no yellow color into the flanks. (Recent experience with spring migratory alternate female Northern Parula's in NYC reinforces this point - typically the yellow is not very intense or very extensive). In this regard the ID favors Tropical. The single most obvious field mark that leans toward Northern Parula are those large diffuse eye-arcs. From my reading, there are some female Tropical Parulas that show limited eye arcs, and so far I've seen no text or representation that shows anything as extensive as this bird. The extent of the eye arcs is reminiscent of a first year (fall) female Northern Parula in many regards. The greenish wash on the crown is also consistent with a first year female of either species. The books list the prealternate moult for the expected subspecies of Tropical Parula to be Feb-Apr so it is possible this bird is still in first basic (which might account for the extent of the greenish wash). Unfortunately I have yet to find good representations for first fall and first spring Tropical Parula, beyond text comments that it is expect to look much like an adult female.

Although the pattern around the eye is unusual (exceptional?) for Tropical Parula the rest of the bird is not unusual, and the female in question paired with a male Tropical Parula.