All photos and text copyright © Phil Jeffrey, 2001-2010. I don't have an issue with personal use the images, but for all other uses please contact me.

Size: a little shorter than a House Sparrow (mainly lack of tail), but much plumper


Overall shape was sparrow like, although it appeared to be rather short-legged and plump. It had a very short tail, and the tail feathers seemed moderately abraded (i.e. this wasn't a fledgling bird, this was an adult). The bill was large and pale pink with a curved upper culmen - there was no yellow gape as from a young bird. The crown was dark brown with fine pale streaking. There was a yellowish supercilium, a darker brown auricular area which was bounded at the bottom by another yellowish area near the malar. The bird had a pale buffy yellow chin, a buffier breast, whitish at the belly with some buffy coloration at the flanks. The bird was apparently unstreaked beneath. The wings lacked obvious white wing bars, or any obvious shoulder patches.

Head shape, bill size, face pattern were inconsistent with Grashopper Sparrow. The bird did not appear to be any sparrow I'm familiar with in the NorthEast (or anywhere else), was entirely the wrong shape for Chipping/Clay-colored/Brewers, and did not have any of the patterning that would indicate Henslow's/Baird's/Bachman's. It's not Cassin's or Botteri's. In any event, the very short tail would easily eliminate these birds. The mass of the bill and some yellow on the face vaguely suggests Dickscissel but the face is inconsistent (no dark malar or throat patch). The bird is also inconsistent with Bobolink in lack of streaking, no dark postocular line, and the darker auriculars. The bill seemed too sparrow/finch like.

Of the birds represented in the popular field guides, the bird is most consistent with an Orange Bishop (see p.357, Sibley; also shown in NGS guide) which is a frequently-encountered escapee exotic in the Los Angeles area. The crown and back coloration, overall buffiness, stout bill and in particular the short tail are consistent. The face pattern remains problematic since the Central Park bird showed a marked supercilium and darker auriculars than is shown in Sibley or NGS. Nevertheless the CPK bird may be in this family, although not actually an Orange Bishop. In response to the original version of this page, Bill Pranty observed: "specific identification of non breeding-plumaged males usually is impossible". A certain amount of ambiguity is inevitable. The white primary on the left wing was noted as a possible indicator of captive breeding - this bird could be a hybrid. However it is at the very least mostly Bishop sp.

Habits: the bird wasn't overly skittish, was hanging out in the phragmites with House Sparrows and feeding on the bread people leave there for the birds. Some very good looks were obtained by passers by, during the 3 days that it stayed in the park. This bird obviously was of a captive origin and was banded on both legs but proved an interesting diversion and ID challenge for many (not least of all myself). 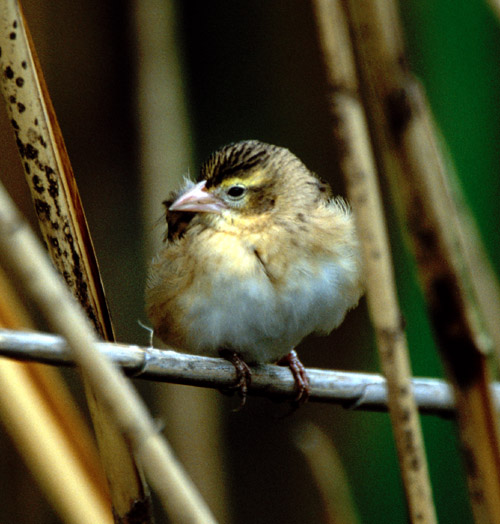 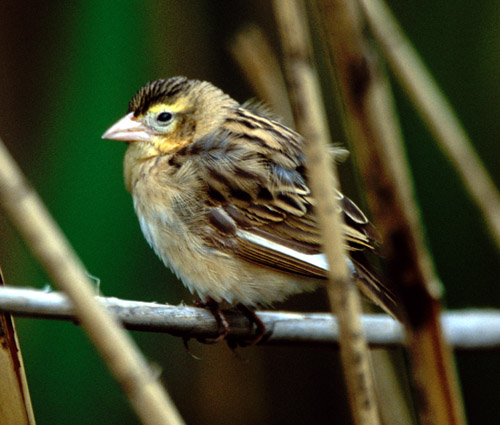 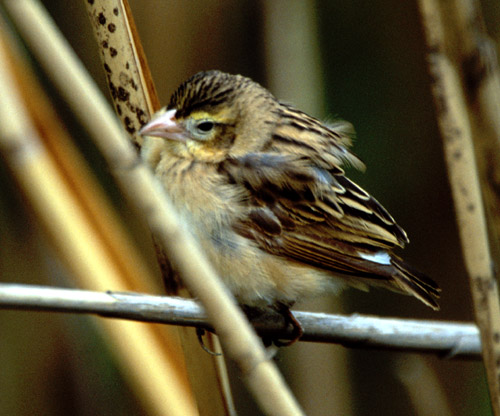 Bill Pranty forwarded me a link to a Weaver from Florida, which looks similar to this bird (though obviously not identical), and Greg Lasley recorded a bird similar to the Central Park bird from Brazos County, TX.

Size: about that of a Dark-eyed Junco, or a little larger


Obviously a sparrow of some type. Initially seen facing away from me, it had a Junco-like habit of flicking the tail partially open, showing also what seemed like white outer tail feathers (not as extensive as Junco). The back however was patterned brown/black, eliminating Dark-eyed Junco. There were no obvious wing-bars - although inspection of the side view photo does suggest a couple of very weak ones.

In profile, the proportions and behavior of the bird was sparrow-like (hopping along one of the paths eating seeds). The breast, face and head were gray of the same color as Junco, the belly was paler. There were two long black stripes on the crown and the color separating them was the background dark gray. There was yellowish stripe in the lores which did NOT extend over the eye to form a supercilium (the supercilium was gray), and a similar mark in the malar region which in retrospect is more whitish. There was a thin dark supramalar stripe separating the white malar mark from a white throat. The bill was pale pink and conical, neither particularly narrow nor particularly short, perhaps larger than a Junco's and comparable to a White-throated Sparrow. The eye was dark.

This bird was fairly tame, and seemed to like to feed along the edges of the paths north of the Azalea Pond. From discussion with some birders, in particular Mike Stubblefield, I settled on Dark-eyed Junco (Junco hyemalis) X White-throated Sparrow (Zonotrichia albicollis) but any suggestions will be especially welcomed. Some features, in particular the yellowish lores and the white throat, do seem to indicate White-throated in it's ancestry. Junco seems consistent with the behavior (feeding habits and tail-flicking) and the dark gray color of the head/breast and possibly also the mostly black tail. Such a hybrid is illustrated in Sibley, although it's not a very close match to the Central Park bird. 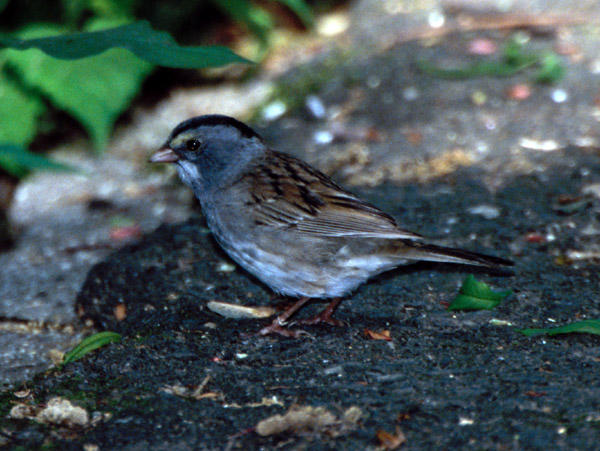 The pictures of this bird did not come out as well as I would have liked, nevertheless this side view shows a lot of the critical features: white throat, a very thin dark malar stripe and the whitish supra-malar region. This is very similar to immature or tan-stripe morph White-throated Sparrow. The back color and pattern is also similar to White-throated Sparrow. The face and breast color is similar to that of a Junco, although it's not possible to be definitive of the eye color in this photo (dark, but it may not be as dark as Junco). The pink bill is long but a little narrow (narrower than White-throated ?). The use of flash here washes out some details - the breast was grayer than the image suggests, and the dark malar line is almost invisible. The photo suggests that the supercilium may be a fraction paler than the cheek, but this didn't strike me as obvious in the field and may be a lighting artifact. 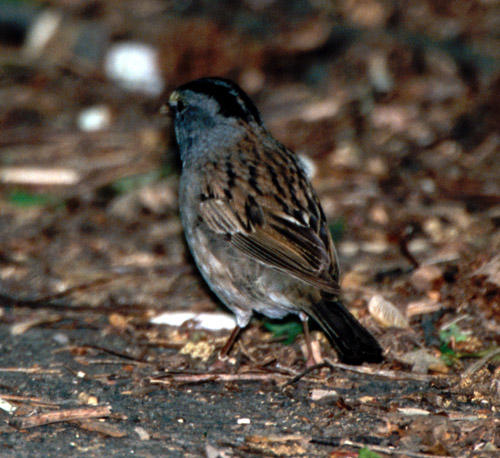 This is a rear-view of the bird, mainly to show the mantle color/pattern and a clearer view of the two black crown stripes with a central gray stripe between them. I have no pictures showing any white outer tail feathers, but there is some pale edging to the otherwise dark tail feathers evident in this image - perhaps this was sufficient to give an impression of a Junco-like tail pattern.