All photos and text copyright © Phil Jeffrey, 2001-2009. I don't have an issue with personal use the images, but for all other uses please contact me.

Off a fairly brisk north wind, a Sharp-tailed Sparrow was discovered in the Oven in Central Park's Ramble by Ellen Rockmuller, Irene Payne and Jack Meyer on the morning of Sunday Sept. 29th 2002. It displayed all the classical features of these Ammodramus sparrows - a flattened crown, narrow bill and bright orange triangle on the face surrounding a gray cheek patch. and the obvious short narrow tail with spiky tail feathers.

(Naming note: when I originally wrote this both Nelson's and Saltmarsh Sparrows had "Sharp-tailed" in their name, so although they've been renamed by AOU I've left in the original name parenthetically).

Although a Saltmarsh (Sharp-tailed) Sparrow was seen in the Ramble on April 30th 2001, Sharp-tailed Sparrows are rare in Central Park. The nearest breeding birds are in the salt-marsh of Jamaica Bay (or possibly Pelham Bay Park) but do not regularly stray into any other city parks. Both Saltmarsh and Nelson's (Sharp-tailed) Sparrows overwinter in small numbers in coastal salt-marshes but are often elusive. It is assumed that the usual subspecies of Nelson's observed in winter would be Ammodramus nelsoni subvirgatus corresponding to the subspecies that breeds in the extreme north-east and winters south of it's breeding range. The subspecies Ammodramus nelsoni nelsoni breeds in the upper midwest and winters on the Gulf Coast.

Almost immediately after writing that last sentence, Sandra Keller reported seeing both subvirgatus and nelsoni subspecies of Nelson's (Sharp-tailed) Sparrow at Stone Harbor Point in NJ (10/3/2002), so perhaps nelsoni isn't as unusual as I had assumed.

There are three similar species of this type of Ammodramus sparrow: Le Conte's Sparrow (Ammodramus leconteii), Nelson's (Sharp-tailed) Sparrow (A. nelsoni) and Saltmarsh (Sharp-tailed) Sparrow (A. caudacutus). The latter two were, until fairly recently, considered to be the same species. Le Conte's Sparrow is fairly straightforward to separate, when seen well, by several criteria including a pale central crown stripe and chestnut streaking in the nape. This bird exhibited neither of these marks, and in any event Le Conte's is the least likely of the three - those birds are very rare wanderers to the east coast.

Various web pages illustrating Saltmarsh (Sharp-tailed) Sparrows are to be found at Audubon, Patuxent and Wing Island. Tom Vezo's site also has an exceptional picture of this bird, and there is also one from Mike Danzenbaker.

Various web pages illustrating Nelson's (Sharp-tailed) Sparrows are to be found at Audubon, and Patuxent. Greg Lasley's site also has an picture of this bird, and also one at the Birds of Oklahoma.

Here is a picture of mine of an adult Saltmarsh (Sharp-tailed) Sparrow from New Jersey (Jake's Landing) in June 2000 showing these features, for example: From the photos below the Central Park bird is a clear match for Nelson's (Sharp-tailed) Sparrow of the nelsoni subspecies. It is a bright bird with little contrast between face and breast, fine well-defined streaking on the breast, broader streaking on the flanks, extended white scapular streaks. In fact there is nothing on this bird that does not suggest nelsoni apart from where it was discovered. (The altus subspecies described by Rising is noted as being not field-separable from nelsoni, and I imagine its wintering distribution is even more ill-defined). Here are two profile shots: 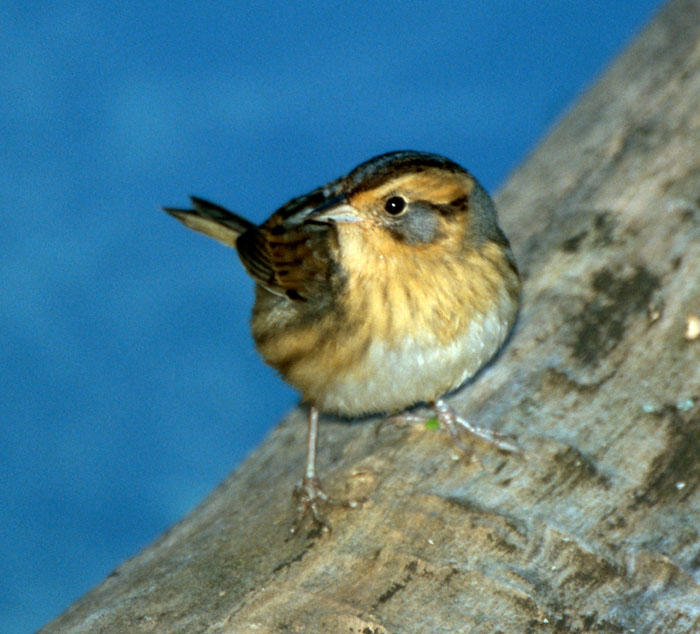 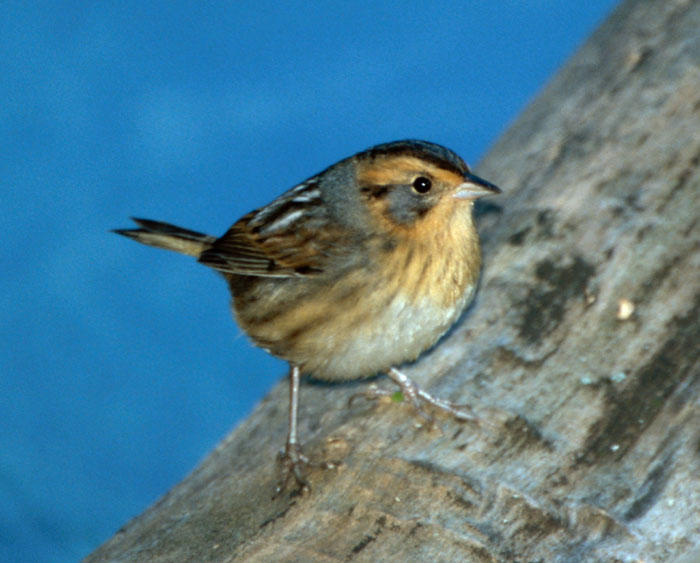 This bird appears to be an adult (or at least in adult-like plumage). Juvenile Saltmarsh (Sharp-tailed) Sparrows can show a much buffier plumage than adults and reduced contrast between face and breast, but this bird had a well-defined gray nape that a juvenile Nelson's/Saltmarsh would lack. 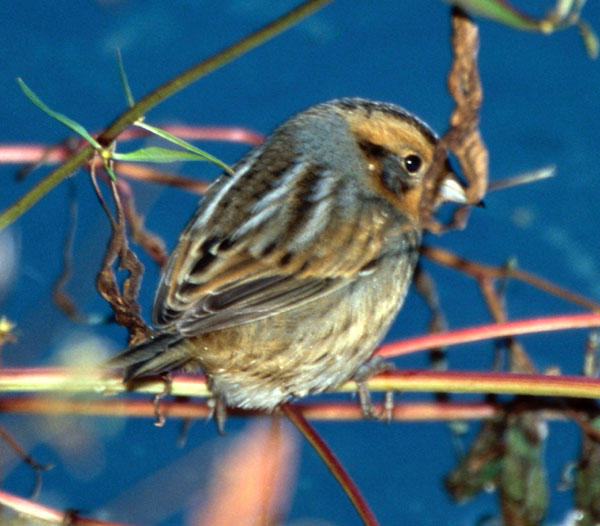