The text "Western Spindalis foraging with a flock of Spot-breasted Orioles" on the eBird ABA rarity report piqued my interest enough that I took advantage of moderately cheap last-minute flights from PHL to MIA ($177) and flew down to Florida to seek them out. The Orioles are ABA-countable introduced exotics in FL and perhaps Los Angeles, but the former is a bona fide ABA rarity. And it was a male - apparently of the Bahamanian Black-backed subspecies.

I like 6am flights since they maximize birding on the travel day, but the downside is that I'm waking up at 3am to make that flight. American Airlines did a decent job - but no food or snacks were offered. Since I decided to be minimal and not check any luggage I got to the car rental center reasonably quickly and opted for Enterprise which had nobody in line, in contrast to my parallel reservation with Avis where the line was full (and consistent with the MIA-Avis Yelp reviews). Enterprise has been, in my limited experience, one of the most consistently good car rental companies at airports. Sun Pass is included in the rental, auto-activating for $4 fee plus tolls per day. However on this trip I was mainly on I-75, FL-825 and I-95 where there didn't seem to be (m)any. If traveling to the Everglades area you'd need to use that option.

Got to Markham Park (Sunrise, FL) at 10:30am and found other birders who were not seeing either the Spindalis or the Orioles. Mid-morning and blowing 20-25mph winds I wasn't totally surprised. In the next 2 hours of birding I saw shy Painted Buntings (males), Yellow-rumped/Palm and one Prairie Warbler, an immature Red-shouldered Hawk and a pale phase Short-tailed Hawk, American Robins, the inevitable Boat-tailed Grackles, both Vulture species. Two to three each of Blue Jay and Northern Mockingbirds. I spent 2 hours there before packing it in.

In the afternoon first to Wakodahatchee Wetlands and then to Green Cay Wetlands in Palm Beach County in the Boynton Beach area. Both places were a little quiet, birdwise - but predictably full of Homo sapiens on a warm weekend afternoon. Wakodahatchee was notably slow with Common Gallinule (Moorhen), American Coot, Double-crested Cormorant, Anhinga, Great Blue Heron, Great Egret, Snowy Egret, Tricolored Heron, Little Blue Heron, Wood Stork. There was one Gray-headed Swamphen (Purple Swamphen in ABA-speak). At the larger Green Cay, mostly the same species plus Blue-winged Teal, Mottled Duck, Pied-billed Grebe, Red-shouldered Hawk, one Roseate Spoonbill, Northern Rough-winged Swallow. Another Gray-headed Swamphen here too. The Double-crested Cormorants had young, suggesting that they had bred here starting late fall, but no other birds were actively nesting. Palm and Yellow-rumped Warbler, Blue-gray Gnatcatchers rounded out the passerines. The only thing at the millet-dominated feeder was a rat. feeder.

I had noticed that a stronghold for Gray-headed Swamphens is the Stormwater Treatment Area 1 East (STA-1E) - west of West Palm Beach but this was a little too far north on this trip to lure me, although it might have expanded the waterfowl count. Clements split Swamphens into six different species as detailed by the eBird taxonomy update but the ABA is a little sluggish in recognizing that the former "Purple Swamphen" in FL is really the Gray-headed Swamphen most of the time, although there may be other versions present.

West of Green Cay to West Delray Regional Park which was allegedly good for Nanday Parakeet, which I didn't see or hear any indication of, but got Loggerhead Shrike, heard a Red-bellied Woodpecker, Tree Swallow, Eastern Phoebe. An immature Royal Tern was here, to my surprise since I associate them as being a strictly coastal species but eBird shows records from this park and other inland sites in December. On to the nearby Loxahatchee NWR mainly to try for Nanday Parakeet but upon hearing raucous Parakeet calls I had to settle for Monk Parakeet. My lone Limpkin for the trip was seen en route, I had a Killdeer fly over, and there were a few of the usual wading suspects including the abundant White Ibis and Little Blue Heron.

I made a hotel reservation and made a last attempt at Egyptian Goose on the way to it in a corporate park where I didn't even find a viable pond. Finished on 0 of 3 targets for the day - not the most auspicious start.

Twilight at Plantation Central Park - conveniently close to Markham Park - where three Egyptian Geese were on the lake along with several Muscovy Ducks (feral), White Ibis, Common Gallinule and many chipping Palm Warblers. Since I've seen wild Muscovy Ducks in the USA (TX) I'm unwilling to count feral ones for anything except my FL state list.

Back at Markham Park I had to circumnavigate the entire park to reach the nature trail area (otherwise 200 yds west of the entrance). I got there at 8:10 whereupon I was told that the Orioles had vanished north 5 minutes prior. Windy again and rather overcast and slow going at first. Monk Parakeet and Loggerhead Shrike to add to the list, then subadult Bald Eagle and finally in rather dark lighting conditions six Spot-breasted Orioles turned up. The Spindalis was not associated with them, but this was the second of the target birds. I stayed around until just shy of noon and then decided to go look for other exotics in Miami. First went to the Baptist Hospital in Kendall where there was a flock of (uncountable) Mitred Parakeets and some Muscovy Ducks whose chicks were already used to begging from humans. Fish Crow, Little Blue Heron and Anhinga here.

A nearby semi-private neighborhood in Kendall held Red-whiskered Bulbuls which I only found because of their musical vocalization and being able to compare to xeno-canto vocalizations downloaded on the fly since the Sibley app has none. No pics because it was dark and near people's back yards.

Then Ocean Bank at Le Jeune (NW 42nd Ave) and NW 7th St where five White-winged Parakeets where calling in the palms in the courtyard along Le Jeune. This too is not a location where I'd really want to haul out the big camera for extended periods - right next to a busy intersection and out front of a bank and restaurant. Besides which the light was pretty ugly - solid overcast. Fortunately the light was just good enough to clearly see the white on the primaries and secondaries on the folded wing to distinguish it from potential Yellow-chevroned Parakeets (uncountable), although I didn't manage to snag looks of them in flight - they were just silhouettes.

Back up to Markham Park where nothing was happening, and then to Brian Piccolo Park where it took me a while to realise that there were no recent Burrowing Owl reports from here - I don't know if this means they are more seasonal than expected or if they've been harassed out of the spot - there was still yellow tape around various potential nesting sites. American Kestrel, Monk Parakeet, Palm Warbler, Cooper's Hawk, and perhaps a singing Eastern Meadowlark. A couple of large geese overflying looked more like Egyptian than Muscovy but I had ventral views in bad light.

The "life birds" were all exotics but I had four USA birds for the day, something that is borderline impossible in the Lower 48 given that my 49-state USA list was 710 at the start of the trip. Egyptian Goose was a USA-only species since they are quite well-established in parts of northern Europe and I've seen them in Britain.

Overnight at Universal Palms Hotel at the northern edge of Fort Lauderdale. Quite a lot cheaper than the previous night, and perfectly fine, although it was really close to a rail crossing that was in use for commuter traffic. 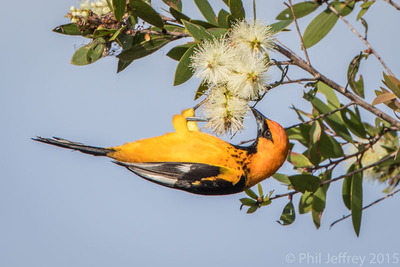 Torrential rain in the twilight drive down I-95, but that seemed to be it for the rain since it cleared out fairly quickly. 7:40am at Markham Park where other birders preceded me and clearly not that many people pay attention to the 8am opening time at this park. Fortunately there were a few of us so the Spot-breasted Orioles were quickly found. In a little while the Western Spindalis was also found, often giving reasonable views in between sessions of skulking low in the brush. For a while the Spindalis was certainly tagging along with the Orioles - as advertized - but later on they separated from each other and the Spindalis spent more time in the butterfly garden. Dark-phase Short-tailed Hawk, White-eyed Vireo, Blue-headed Vireo, Common Ground-Dove were additions from the previous days but the Spindalis was most certainly the star of the show, the target for the trip and #5 of 5 targets.

Plantation Central Park still held plenty of Muscovy Ducks but the Egyptian Geese were AWOL. Chapel Trail Park Nature Preserve in Pembroke Pines had two Gray-headed Swamphens and a Prairie Warbler. This is the place I got my lifer Swamphens, but there was very little going on here around noon.

Instead I started to wind down the trip by visiting A.D. Barnes Park in Miami - the nature center area very slow but one Yellow-bellied Sapsucker. The lake at the southern end marginally more active - a mixed warbler flock with Yellow-rumped/Palm Warblers, a Nashville, a Black-and-white, a couple of Northern Parulas. Green Heron was the only thing on the lake but two Ospreys flew over. At 3pm my desire to wrangle urban Miami rush hour traffic in search of another site was limited, so I opted for the slacker option and started working on this trip report while sitting in the shade and enjoying the breeze and the mixed warbler flock fly-bys. After filling up the rental car with gas prior to returning it I stopped again at Ocean Bank which was only a few blocks from the car rental center - this time no Parakeets were seen or heard.

American Airlines had us depart from a terminal that was under construction (!) and was late leaving by 15 minutes. But otherwise the return leg of the trip was uneventful.

Since 4 of the 5 were exotics, I'd really rather 699 and 700 for the Lower 48 to come from a wild population. Absurdly I still don't have Ruffed Grouse for my USA list so this would be a good candidate.