Whip-poor-will and Chuck-will's-widow - Seen From Below

Based on the original version of this text, I've had helpful input from Karen Fung, Eve Levine and Ben Cacace (nevertheless I welcome more input). This piece remains a work in progress, however, and I've yet to attempt to get a look at skins of each species to get a more detailed impression. I first started writing this text before the split into Eastern and Mexican Whip-poor-will (Antrostomus vociferus and Antrostomus arizonae respectively) but I've modified the text to reflect the new species name.

An Eastern Whip-poor-will was found by Michael Gitlin along the Gill in Central Park on Apr 30th 2007 in a location reminiscent of the 2004 Eastern Whip-poor-will of controversial identity. The 2004 bird was a male, based on the white tips of the retrices (tail feathers) and the 2007 bird was a female based on buffy rather than white tail tips - see Peter Pyle's book "Identification Guide to North American Birds" (for this and more):

Nevertheless the structure of the two birds are strikingly similar, and the ID is not in question. Rufous barring on the primaries and overall rounded primary shape and tail shape easily eliminate Common Nighthawk - the Nighthawk has uniformly dark primaries which extend to the tip of the tail (Whip and Chuck tails are longer than the primaries on perched birds) and the white mark half way along the folded wing is often pretty obvious in Nighthawks. The discussion tends to center around the discrimination between Eastern Whip-poor-will and the far scarcer Chuck-will's-widow.

Fortunately Andy Guthrie found a Chuck-will's-widow nearby at the Azalea Pond in Central Park just a few days later on May 3rd 2007. This very exciting find was also photographable and below is a picture taken in afternoon light by Scott Zevon (and © him) of this bird: 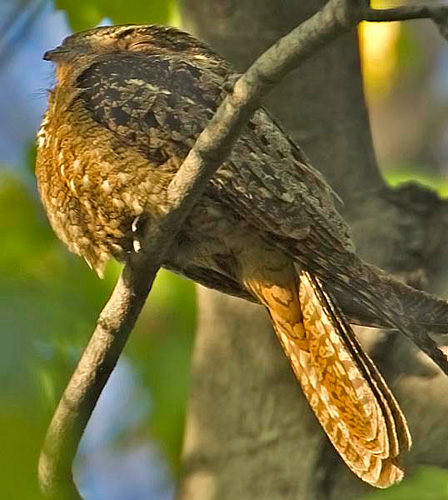 To make things easier I've stacked the two 2007 nightjars side by side:

On May 14th 2008 Dick Gershon's group found another Chuck-will's-widow in the park, down the Point, and I was able to get pictures of this one myself. This was also a female as judged from the undertail pattern. This particular bird was seen as much from the side as below. Additionally its relatively large size was immediately evident - and notably larger than an American Robin that perched nearby. 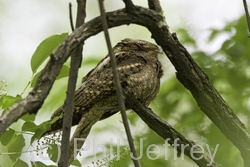 Although it's really tempting to make something of the fact that both CPK Chucks have perched across the branch with the tail held down below the line of the body, those are the sum total of all the Chucks that I have seen (I've heard more). Eastern Whip-poor-will's seem to perch more along the branch with the tail held more in line with the body. A web image survey suggests that it's a trend but it's not a distinguishing mark, nevertheless any nightjar with a drooping tail perched perpendicular to a branch is worthy of special consideration.

David Sibley's field guide, for example, deals mainly with the top-down view of the bird which for non-park birders might be a reasonable pose, but we tend to see them from below. I'm not really enamored of Sibley's representation of these nightjars which to my eye makes them seem too small and dumpy when they look more elongated to me - it makes them look like the diminutive Common Poorwill. The National Geographic book (I have version 3) has poses which are closer to my exprience. One can use images.google.com to form your own impressions.

The 2013 Chuck-will's-widow was more distant but Bruce Yolton has some nice photos showing the undertail, where again it's immediately obvious that it's a Chuck-will's-widow just from the pattern alone. It's also perched across the branch, once more.

There are various field marks which distinguish between the two birds. The first is the overall color: Chuck-will's-widow averages much buffier, and this is amplified in Scott's shot taken in warm light toward the end of the day and in the 2008 bird from my own photos. While not quite rufous, it's certainly quite a warm shade of brown. Whips more so than Chucks appear to show more color variation, so this is not an absolutely guaranteed field mark although none of the Eastern Whip-poor-wills that I have seen in the North-East have showed much color variation. In photos perceived color is often strongly dependent on the illuminating light (under canopy, fill flash, main flash etc).

In October 2013 I was sent this picture of a Chuck-will's-widow recovered in Panama City, Panama. Thanks to Panama Audubon Society for letting me use it: 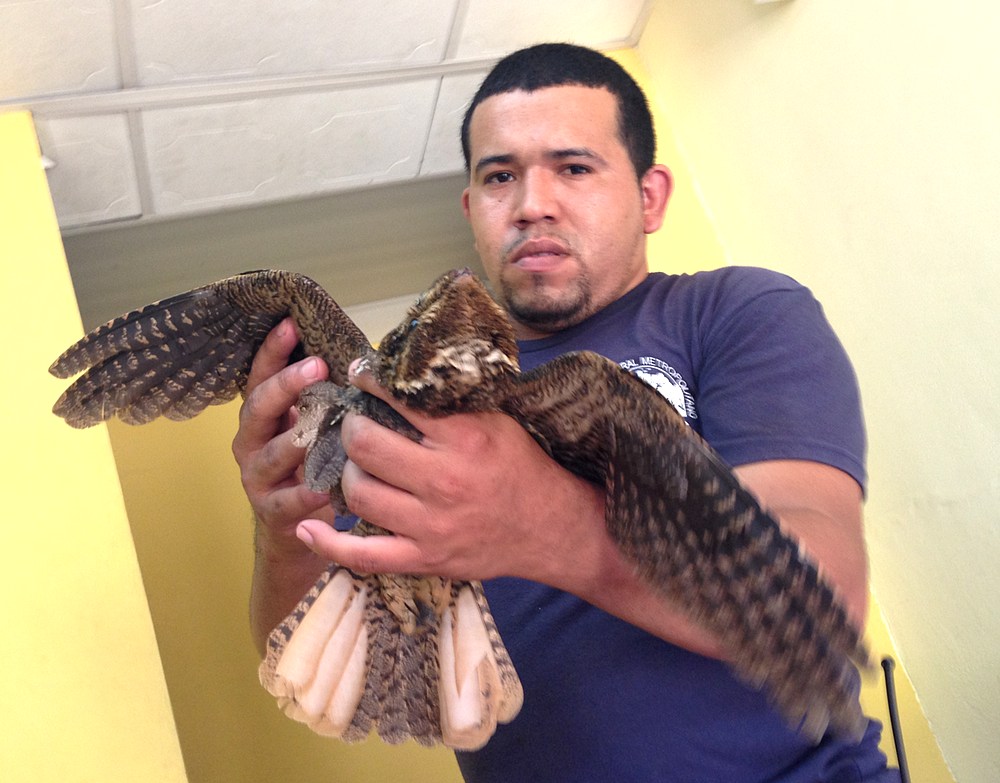 Apart from anything else look at the size of this bird, which has a wingspan of over 2 feet, but you'll also notice the large white patches on each outer tail feathers and the mottled pattern on the inner four retrices. No black whatseover in that tail.

The black throat pattern which should be present on male Eastern Whip-poor-wills does not seem to be an especially good ID mark from personal experience since it's often not well-resolved when viewing from below the bird and on the 2004 and 2007 Whips it was not prominent. At other angles it might be a usefully definitive ID mark, but there's a risk of a shadow being mistaken for a the black pattern and both species can have white collars.

With the benefit of seeing the Eastern Whip-poor-will a few days earlier in 2007, the Chuck-will's-widow is a notably chunkier bird - albeit only 20% larger in length the Chuck has a much heftier look about it. This was amply reinforced by the 2008 bird which really showed it's size well. This may not be conveyed well in the photos but the Whip looks close to the size of a Common Nighthawk whereas the Chuck looked considerably bigger. The Chuck-will's-widow clearly has a proportionally much larger and flatter head which is almost half the extent from the bill to the end of the back - this can be seen very obviously from the side-by-side photos where the eye on the Chuck is a long way back on the body because of the sheer extent of the head - in part it's situated there to accommodate a huge mouth. The fact that the tail on this bird is held downwards - and was also held like that periodically on the 2008 Chuck - enhances this impression but nevertheless if it doesn't seem to have a huge head you've got to wonder about identifying it as a Chuck-will's-widow. (See also this picture by Mike Danzenbaker, compared to his Eastern Whip-poor-will shots). The Eastern Whip-poor-will's head is relatively smaller (though by no means small) and rounded. The primary shape is also of some use - the Eastern Whip-poor-will's is relatively rounded whereas the Chuck is relatively pointed (not shown on photo) and in fact on the fly-out at dusk in 2007 this was clearly seen when the bird flew over the top of the canopy in silhouette along with the impressive wing span. On the photos here and also on the web there is a sense that the projection of the bill from the head might also be a secondary ID feature - appearing to be more prominent in Eastern Whip-poor-will - Ben Cacace has disagreed with this point so it's probably best regarded as either highly subjective or entirely spurious.

The first Chuck-will's-widow I've seen in NYC in several years stayed for several days in Bryant Park in Midtown Manhattan in April 2015 (as of writing perhaps still there). It was perched in the lower canpopy of trees that had still not leafed out which gave a typical but useful from-below image: 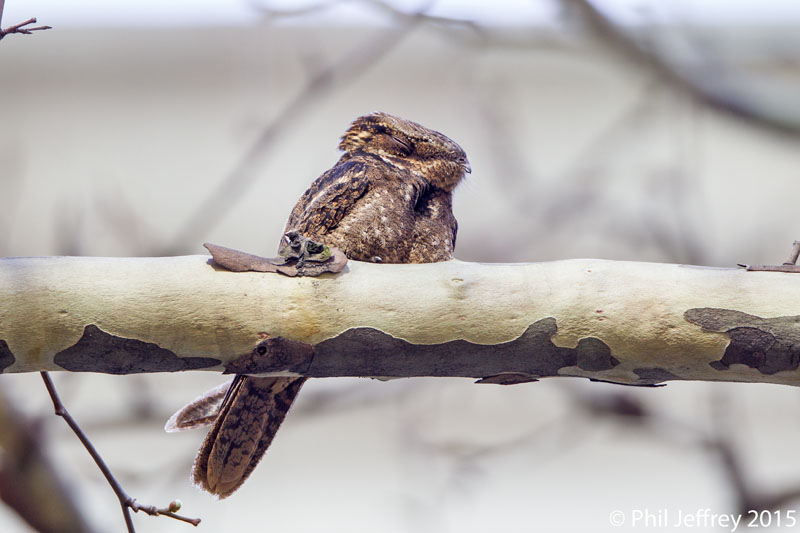 Size is difficult to tell in isolation and with quite a bit of elevation difference but two things are obvious: how flat the head is, and the patterning on the under-tail which seems to be a useful ID point. It's also likely that the spotting on the underside of the bird is probably different between the two species although that may not be easy to assess in the field. Note that although it looks like this was shot side-on it's shot mostly from below so the bird's head must be tilted down for this shot (I have other shots where it is held more horizontal).

To add.... a side view of a Chuck roosting in the shadows of the Valley Land Fund lots on SPI. Ironic that after the 2007 and 2008 birds I see my third, fourth and fifth Chucks within a few days of each other in 2015.

Karen Fung found an Eastern Whip-poor-will at the north end of Central Park in the area of the lock on 9/26/2015. This was my first Whip-poor-will of the year so I went up to see it. (I had heard Mexicans in June in AZ). The bird was immediately obvious as a Whip-poor-will - a small-ish head, rounded in profile, the bird itself not particularly massive (robin-sized or smaller) and most telling of all the large buffy-white tips on the undertail. In fact I remarked that it could be ID'd as a Eastern Whip-poor-will without binoculars because this feature was visible to the naked eye quite clearly. There's no white throat marking and the undertail patches are a mixture of buffy and white, so I'm not sure where to put it in the age-sex bracket as of writing. Note, however, that the bird had been seen both perched along the branch and also perpendicular to the branch (actually over a pair of branches) so this idea of mine that perch orientation might be a (weak) ID point isn't supported by this individual. Phil Jeffrey, April 2007, updated September 2015