A Whip-poor-will was found by Michael Gitlin along the Gill in Central Park on Apr 30 2007 in a location reminiscent of the 2004 Whip-poor-will of controversial identity. The 2004 bird was a male and this bird appears to be a female mainly based on buffy rather than white tail patches:

Nevertheless the structure of the two birds are similar, and the ID is not in question. Rufous barring on the primaries and overall primary shape and tail shape easily eliminate Common Nighthawk. Head size, bill color, and overall size eliminate Chuck-will's-widow. This is also around the time that Whip-poor-wills tend to be found in Central Park, although both Chuck-will's-widows and Whip-poor-wills were heard singing in southern NJ on April 30th.

Also nearby, at the west side of the Tupelo Meadow, was a male Hooded Warbler, my first of the season:

And on the way out via Bow Bridge I noticed a Snowy Egret touch down on the Lake shore - while seen as a fly-over at the North End during summer Snowy Egrets are very uncommon on the ground in the park. 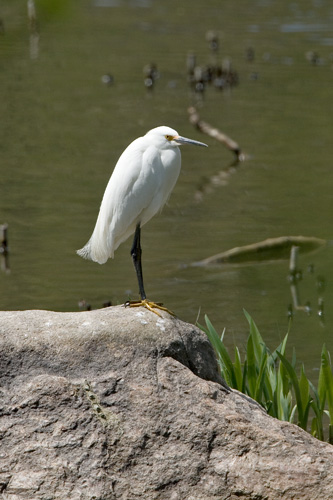