I flew SouthWest SW-1794 EWR-PHX direct on the Wednesday afternoon and SW-3227/SW-37 PHX-BAN-EWR via Nashville on the way back on the following Tuesday. Of these three flights two were full, and one was quite empty. None were delayed significantly and the experience was decent, although 5+ hours on a full flight is not idyllic - this was the day after the biggest snow storm of the winter, so they were playing catch-up with multiple canceled flights and I was lucky that it only ran 20 mins late. In fact if I'd done my usual m.o. of leaving early in the morning my EWR-PHX flight would have been canceled. I rented a car with Dollar, who I've used before at this location, but this was the first time I used Dollar Express which proved to be very efficient.

After a prior winter trip in 2013, in early Feb, I went back to the same general area in 2014 to try once again for the persistent Nutting's Flycatcher (3rd winter at this spot), a Sinaloa Wren at Tubac, and the elusive Ruddy Ground-Doves from the previous trip as well as just generally milling around and birding in warmer temperatures. This was my fifth trip to AZ, with trips three and four being the previous year (Feb, June). A little more experience with where the best spots are in AZ in winter certainly can't have hindered. I used three major resources: the AZNM mailing list, eBird sightings reports, the Tucson RBA. Stuart Healey seems to have deleted his birding site (aztrogon), which was a pity since it was a source of useful location and sightings information - I assume this means he is totally retired now. I can also mine eBird sightings using the BirdsEye iPhone app while in the field (find local hotspots and sightings). To a lesser extent I've used the Tucson Audubon's "Finding Birds in S.E. Arizona" for which I have an older version. I took this book with me although I already knew directions to most places based on planning for prior trips, just in case I needed some additional resources. In fact I didn't use it at all.

I made a return trip to Lake Havasu City and at Rotary Park had nothing of interest - American Coot, Ring-necked Duck, Ring-billed Gull, and after driving over the London Bridge the boat launch at Site 6 was really no better (coots and more common ducks) but my first Northern Harrier was hunting nearby. Still, the main goal was the Nutting's Flycatcher and getting a Blue-footed Boby (which was USA 698) in AZ was pretty special.

Having got all that I needed from the area I Drove down through Parker. Given the paucity of reports from the agricultural valley bordering the Colorado River south of Parker I opted to avoid that detour and aimed for some afternoon birding west of Phoenix. I sought to avoid the worst of the snowbird RV traffic and took AZ-72 and the route via Wickenburg back toward I-10. I saw little en route except Common Raven and Red-tailed Hawk in the agricultural areas around Wickenburg. Common Raven is unambiguous this far west - no Chihuahuans. House Sparrow, Say's Phoebe, (Audubon's) Yellow-rumped Warbler were at the I-10 rest stop 30 miles or so west of Buckeye - I remember seeing House Sparrows here last year, in what is really desert scrub and outside what I consider to be normal habitat range for them. Still parking lots and House Sparrows do seem to be a match.

I hopped off I-10 shortly after that to head down Salome Highway, and things started to get more interesting along Salome including Loggerhead Shrike and more hawks. The Palo Verde nuclear power installation was prominent as usual - venting cooling water into the desert sky. Got to question the wisdom of having a water-hungry installation in an arid area.

Down in the agricultural valley around Palo Verde: Northern Harrier, American Kestrel, a huge blackbird flock along Old Hwy 80 that had Brown-headed Cowbird, Brewer's/Red-winged/Yellow-headed Blackbirds and the inevitable Eurasian Collared and Mourning Doves. Up Bruner Rd to Lower River Road thre was no Burrowing Owl in last year's spot, but Killdeer Say's Phoebe and Vermilion Flycatcher at that intersection (which is just west of the ponds). Here I also saw a probable Sharp-shinned Hawk but like many of the Accipiters in the first few days was somewhat ambiguous. The pond at the curve on Lower River Road had Northern Shoveler, Black-necked Stilt, Least Sandpiper and Great Egret. Vesper Sparrows were across the road at a cattle corral. A Ferruginous Hawk was hunting low along the field where that road meets Old Hwy 80, at which point I think it's called Route 309. The Ferruginous showed the characteristic shallow-V set of the wings, and was low to the ground making me think that it was a Northern Harrier before I checked it.

At the Thrasher spot it was quiet, with an initial Cactus Wren followed by nothing, no sparrows. Eventually I found two Abert's Towhees and nearby two Le Conte's Thrashers (including one singing), then a few Sagebrush Sparrows, a Sage Thrasher. I did not see any White-crowned Sparrows or Bendire's Thrashers. And the only other birds were Loggerhead Shrike and American Kestrel. Along Arlington Canal Rd: Great Egrets, Say's and Black Phoebe, possible Harris's Hawk (that looked confusingly huge), Black Vultures headed to roost, blackbird and dove flocks, Belted Kingfisher, Western Meadowlark, more Red-tailed Hawks including one with a white tail that was almost Krider's-like. Along the extension of Old Hwy 80 - the dead-end section, a field held a flock of Long-billed Curlews with some Greater Yellowlegs and a pair of Burrowing Owls on the banks, with several (Neotropic?) Cormorants headed west along the river. Notably no White-faced Ibis in this area, despite flocks of them last year. 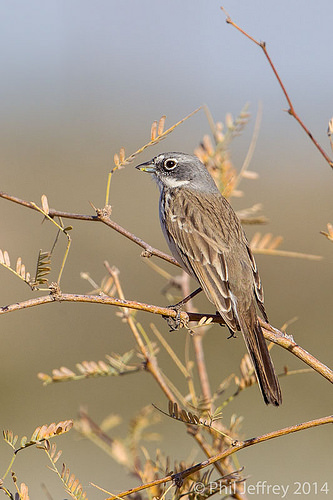 I then cut south to I-8 and east to Tucson where I stayed overnight in a Travelodge close to the south side of the city. This Travelodge was cheaper and right next door to the Motel 6, yet I'd rate it better than the Motel 6 in terms of room quality. While certainly not luxurious, I ended staying there a second time on the trip.